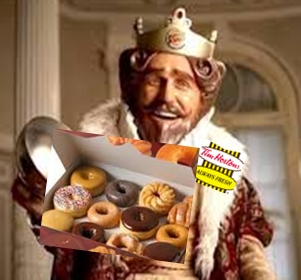 What is all this fuss about Burger King buying Tim Hortons? And why do people make it sounds like it’s such a terrible thing? Especially if the patriotic Mr. Warren Buffett is involved? When you read the reports, you hear two words over and over: tax inversion.

America is the land of the loud and the home of the hype, so it’s not surprising to hear things like Ohio State Senator Sherrod Brown indignantly proclaiming: “Burger King’s decision to abandon the United States means consumers should turn to Wendy’s Old Fashioned Hamburgers or White Castle sliders. Burger King has always said ‘Have it Your Way’; well, my way is to support two Ohio companies that haven’t abandoned their country or customers.” Abandoned their country, eh — pretty strong words.

So, there’s talk of a Burger King boycott in the air. Fumed Mike Gee, of Magnolia, Arkansas on the Burger King website: “Move to Canada to avoid paying taxes and I will never darken the door of a Burger King again. Does corporate greed in this country ever end?” Activist group MoveOn.org has obtained more than 1,000 signatures on its petition to kill the “Whopper Tax Dodge” and institute a boycott.

The purveyors of hot air are in for more tax inversions. This table from Bloomberg shows the trend:

So, who knows? Is the Burger King and Tim Hortons merger a harbinger of more?

But, getting back to the rhetoric so beloved by politicians and activists, is it true? Is Burger King a corporate deserter, trying to get out paying “its fair share” of taxes?

What is “their fair share?” What is a tax inversion? Why is it bad… if it’s bad at all?

What Is Tax Inversion?

Tax inversion revolves around a quirk of American corporate taxation. Around the world, most countries tax corporations on the profits they make in that country, but leaves the money they make outside their country alone.

Not America. For starters,, America’s tax rate, at 35%, is one of the highest in the civilized world. That’s not the bad part, as corporations see it. The bad thing is America taxes profits a corporation makes overseas as well.

Corporations in general are okay with paying American taxes on American profits. It’s when they have to pay American taxes on Japanese, Canadian or Irish profits that they feel they’re paying more than “their fair share.”

To illustrate this, let’s say you have two identical companies, Canadian Queen and American King. Both earn $1 million in profits. American King has to pay $350,000 in income tax, while Canadian Queen only pays $250,000. In total, then, both companies pay $600,000 in taxes to their respective governments, and everybody is content… including the governments.

Now, let’s say the two corporations fall in love with each other and they want to merge. There are two ways they can go:

That’s no different than before. On the other hand, if American King buys Canadian Queen, this is their new tax bill:

Some corporations feel American taxes on foreign operations is a tax grab which extends beyond the notion of “paying your fair share.”

That $100,000 tax on foreign operations in the previous example, well, you don’t have to pay that now if you’re an American corporation. You only pay that when you repatriate the money back to the USA.

So, if you’re an American corporation like, say Apple, who earns billions of dollars of profits overseas, you end up keeping billions of dollars overseas in order to avoid these excess taxes. When you want to build a new plant, which will cost a few million dollars, where do you build it? You’d like to build it in America, but those pesky taxes just add 20% to your building cost. Can you blame them for building the plant overseas?

So, a tax policy which doesn’t make sense for corporations ends up giving America fewer jobs and less manufacturing.

Critics generally love the sound of their voices more than facts. But here are the facts in the Burger King–Tim Hortons merger:

1. Tim Hortons is actually more than twice as big as Burger King in both sales and profits, as the orange circles in the next table, put together by the (Canadian) National Post, shows:

2. Burger King is worth more than Tim Hortons, even though it’s half the size. Why? Because the investors who make up the stock market thing they’re going to make more money with the King than with Tim. That put Burger King in the driver’s seat.

3. This merger is not about tax inversion at all. It’s about a highly valued company buying a bigger company for a bargain price. It’s very much a merger of equals, much like Canadian Queen and American King in the example above. And, just like those two mythical companies, their real-life counterparts decided it made no sense at all to suddenly start paying the IRS taxes on Canadian profits the IRS never got anything on before.

And so, the majority owners of Miami-based Burger King created a new company, based in Canada, and this new company bought out both Burger King and Tim Hortons.

Now you know the facts. Be careful next time before the media (and politicians) appeal to your innate sense of fairness to get you outraged by feeding you hype in stead of facts.

There is one fact, though, you can always count on: you can save money without crossing borders or being a deserter. Grant and his team will always get you the best rates on your auto and home insurance. No need for any mergers or tax inversions: just plain good deals. If you haven’t had a review in a year, be sure to give them a call. It’s your money…