Jobs After The Great Recession

As Mark was getting ready to graduate from high school, recruiters came to his school to recruit him to join Uncle Sam’s armed forces. The benefits, we all know, are good: cheap education, great benefits, and job security. Most high school grads, out to conquer the world by themselves and for themselves, spurn Army recruits and look for “real jobs,” and Mark followed their lead.

What a surprise, then, to find Mark, enlisting a few years later, along with thousands of his peers. It’s true, according to a recent study by the RAND corporation. Since the early 1990s, the percentage of Army recruits signing up immediately after receiving their high school diplomas has declined from 65 percent to 44 percent. It’s not an overnight thing, then — it’s a trend that has been sustained for more than twenty years, and there’s no sign that it’s going to reverse itself soon.

This chart from that study shows the trend clearly:

The RAND study focused on finding out the reasons: why do high school graduates spurn the Armed Forces recruiters, only to change their minds after a few years and enroll?

Two reasons, which are really two faces of the same coin: there are no jobs, and the jobs that are there have no promise. The numbers bear this out. First, look at the unemployment rate. At no time in the past has it taken this long for employment to recover after a recession: 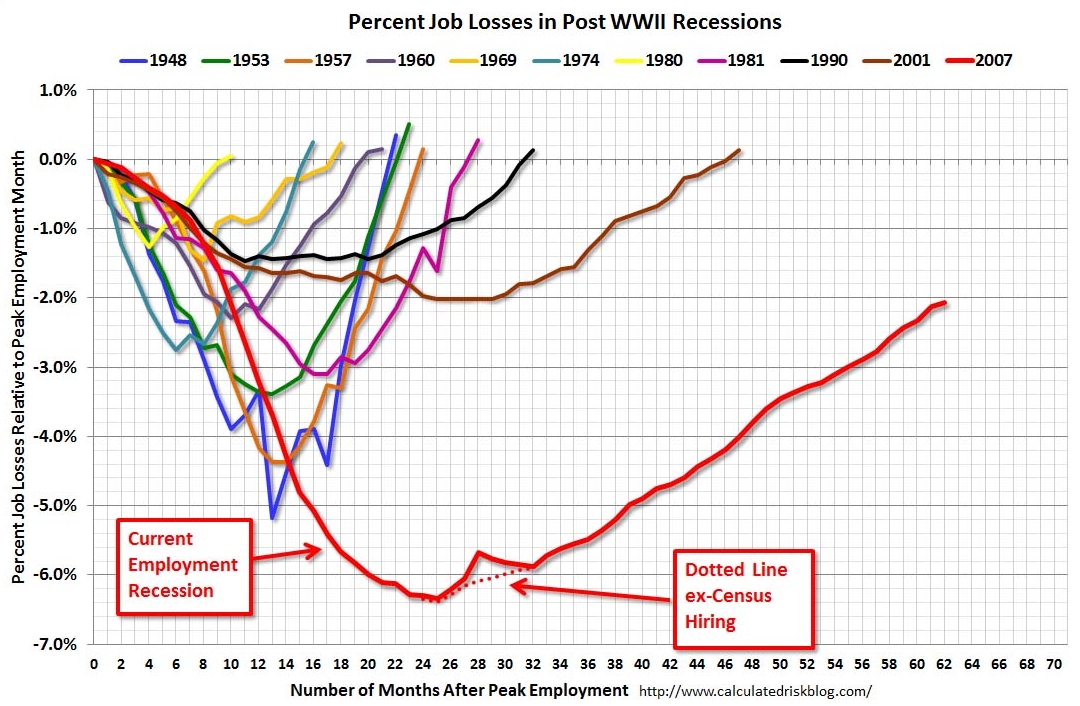 It gets worse. You’d think that in a competitive labor market the (cheaper) youngsters would displace the (more expensive) older workers, but you would be wrong.

The measure that’s used by analysts is called the labor force participation rate. That’s fancy-speak for determining what percentage of the population “participates” in the labor force, i.e. what percentage of Americans work in a job. The following chart shows how the participation rate for younger workers (ages 16-24) trended since 1948, compared with that of older workers (over 55 years of age): 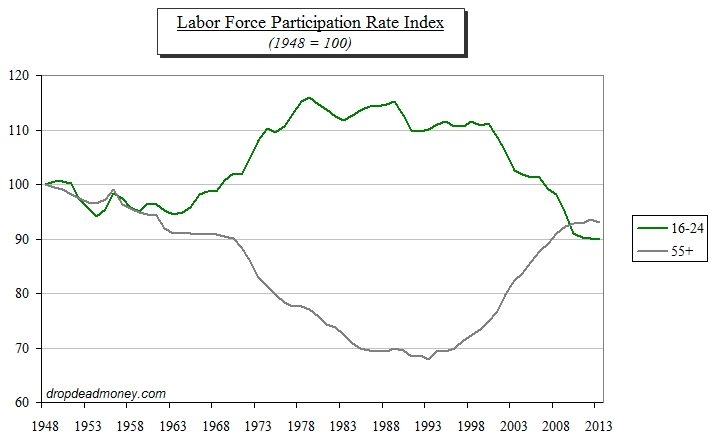 Not what you would expect, is it? The second chart shows jobs are not coming back as soon as they did in the past. The third chart shows that members of the younger generation are not getting in on what jobs there are available.

And that explains why more twenty-somethings are joining the Armed Forces, just to get a steady income.

The History Of Jobs

Quite possibly. To understand what’s happening, it’s helpful to take a big step back and look at the history of all mankind. For more than 6,000 years, the way we made a living was as independent contractors and/or small business owners. You were a farmer, baker, smith, or you ran the general store. And you lived where you worked. Getting around was neither easy nor quick.

Kids learned their parents’ occupation from an early age through a de facto internship. Kids paid their way and contributed from an early age, making them a valuable financial asset, so large families were the norm. If you father was a cobbler, odds were that you became one, too. School’s primary value was equipping you to read, calculate and write, so you could interact with your customers and vendors and run your small business. Education beyond that had marginal value, except perhaps to become a teacher. Universities existed pretty much only as finishing schools for the offspring of the wealthy.

Then came the Industrial Revolution. It was a technology breakthrough which harnessed physical power (steam, internal combustion engines and electricity) to shrink distances and time, and offer people things they never had before, from refrigerators and combines to automobiles and telephones.

Technology introduced economies of scale, which allowed industrialists to offer jobs to people. Those jobs paid them more than they made as the village baker or saloon keeper, with more job security. People no longer made a living from their own small business; now they made their living from a job.

To get those jobs, people moved to the cities where the factories and mills were. No longer did people live where they worked — commuting became normal. Parents no longer had a profession or craft which required free labor, so kids didn’t grow up with “on the job training” from an early age. Kids now grew up with the notion and role model that you made your living from “getting a job.”

In order to get a better job, and have a better shot at getting that job, getting a college education became a vital stepping stone. Universities sprang up everywhere, and the focus in higher education went from the rather leisurely and romantic notion of a liberal arts education for the children of the wealthy to qualification for a money-earning career. “Traditional” educators still cringe at the notion of college degrees for engineers, medical doctors and bankers.

In other words, for the past hundred years or so, we were raised from an early age with the goal of getting a job as the primary means of making a living. Without thinking about it, we just assumed this is the norm, the way it has always been.

Not so. In the greater scheme of human history, “industrial age living” has only been around for a very short time. If you were to chart it, it would look something like this:

And now that model is breaking down before our eyes. The well-paying factory jobs have moved to countries which artificially lowered the currency exchange rate so it would look cheaper, and office jobs have been eliminated by computer software. All that’s left are low-paying jobs in fast food restaurants and part-time jobs.

The Future Beyond Jobs

That’s the bad news. The good news is technology, once again, is changing how we live, only this time it’s offering us the opportunity to once again return to our roots: working from home as independent contractors. This is what mankind did for century after century; you could say it’s what we were wired for.

Where the industrial revolution shrank time and distance with things mechanical, the internet is shrinking time and distance with electronic communications. I’m helping a friend by doing their books… from home. A friend of mine has built a business around blogging and consulting… from home. She still takes her kids to day care, because the work takes a lot of time and concentration. Another friend of mine runs a manufacturing business with a partner… from their homes. They send their designs to China and take orders from dealers nationwide. The stuff gets made and shipped in a container. They unpack a container a month and immediately ship the units to their dealers. If they wanted to, they have the option of contracting even that out to a logistics company.

We live in an age where there are hundreds of resources which never existed a decade or two ago, resources which are enabling  the next revolution, the Virtual Revolution. You can think of those resources like Levi Strauss and Well Fargo were to the gold miners: resources people needed to go prospecting. These resources enable you to start in your basement after “work,” and build up your business. Then, when the now almost inevitable axe falls on your job, or your hours get cut back, you have something to fall back on.

Only it’s not falling back any more — it’s falling forward. Think about it: in the industrial age, people worked at a job they didn’t particularly care for in order to “retire,” i.e. do something they really like doing. Now, you can do what you really like doing at a much younger age, and earn a living from it. And you’ll never want to “retire” any more, because you’re already doing what you wanted to do when that time comes. Nobody retires from retirement, do they? Likewise, you’ll live the rest of your days doing what you enjoy doing.

Some things, of course, never change, like your need for comprehensive insurance coverage at the lowest cost… and Grant’s ability to get you that. So, don’t wait for the next revolution — call him today for a review of your coverages and to find out where he can save you money. You do want to save money, don’t you?