Why Are Health Care Costs So High In America?

We have a nephew who lives in Switzerland whose wife recently gave birth to their second son. She stayed in hospital for an entire week, and the entire process cost her… nothing. Contrast that with this report from the New York Times, detailing how expensive childbirth in the States is, symptomatic of health care costs gone out of control. Here’s a chart from that article:

Ours is not just higher, it’s more than double any other civilized country’s. Here are a few quotes of mothers with experience of giving birth in other developed countries:

“I’m giving birth in one month in a European country and I’m paying nothing. Prenatal care is free. Scans are free. The only thing I’ve paid for are scans and doctor visits before the 12th week of pregnancy, as this is when the public maternity care starts.”

“I gave birth in Germany in 1991 and also delivered twins there in 1993. There were no co-pays for prenatal care or for the deliveries. That’s right, my out-of-pocket cost for pregnancy-related medical services was 0. I was very happy with all the services.”

Does the higher cost bring higher quality of care? In a word, no. To quote the NY Times article, “Despite its lavish spending, the United States has one of the highest rates of both infant and maternal death among industrialized nations…”

The cost for having a baby is of course only the tip of a bigger iceberg: the outrageous cost of American health care, compared to other countries. Take a look at this chart: 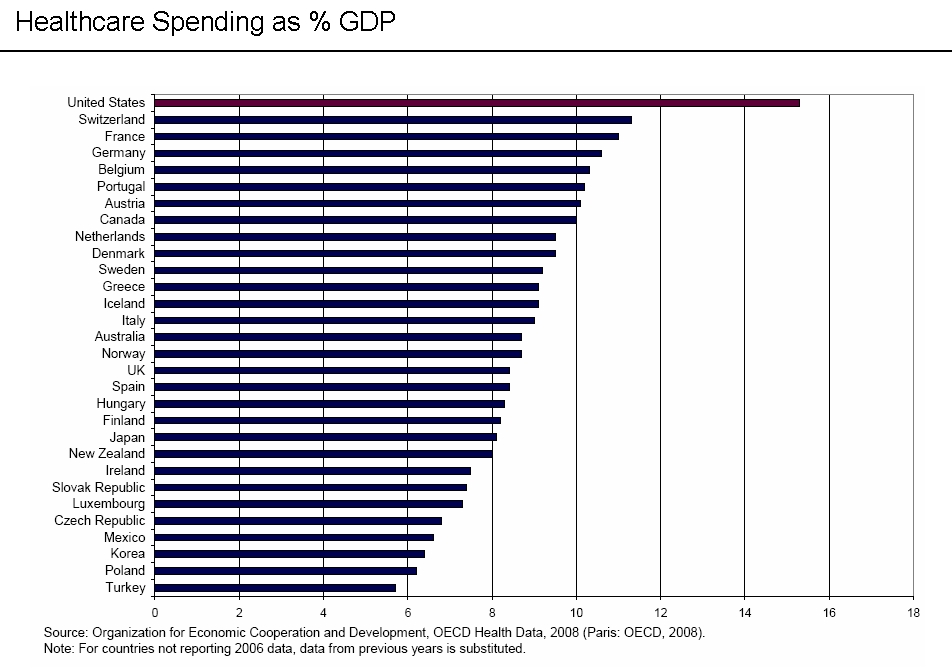 Other countries’ costs are close to each other, leading one to suspect that there is a “reasonable cost of health care,” and that health care costs in America have escalated beyond reasonable. For instance, a bag of salt water (saline solution) which costs less than a dollar to make, ends up being sold for more than $100. 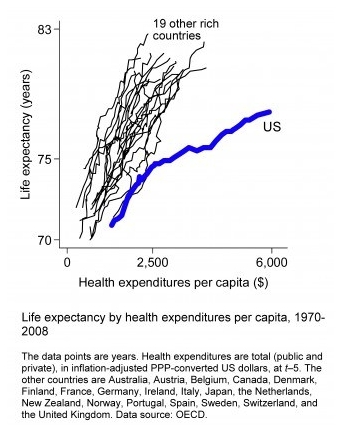 Someone might be tempted to argue that the higher cost buys higher quality of care. If that’s you, don’t even think about it. It’s rare that commentators agree on anything, but there’s almost total unanimity that American health care is nowhere near the top. And, when compared to the cost, the picture looks even bleaker: by several measures, America ranks closer to the bottom than the top. A recent study showed just how out of whack the value for money is that American patients are getting. The diagram to the right was taken from it and shows how:

It is stark, the degree to which America stands out as the bastion of expensive, but poor, medicine, compared to the rest of the civilized world. Another study reported by Reuters shows that France, Japan and Australia rated best and the United States worst in rankings focusing on preventable deaths due to treatable conditions in 19 leading industrialized nations.

Why, Then, Are Health Care Costs So High In America?

Many analysts and observers have come up with many explanations for America’s high  health care costs for significantly less than perfect quality, like here , here, here, here, and here. There is a list as long your arm of people who know the situation and have explanations.

Here are some threads of those discussions and some thoughts people too close to the system may be overlooking:

Among developed countries, America is unique in its system of payment for medical services, which intersperses two parties between the patient and the provider. The employer limits the choice of insurance carriers to its employees, the ultimate patients. That’s a first level of removing choice. Employers may tell their employees they’re offering them the lowest choice carriers, but simple observation says that cannot be true, because there is no single insurer who has emerged as the dominant one because it’s the lowest cost provider of coverage.

Then there’s the insurance companies. Their business model is very simple: take last year’s claims, and add 40% for overheads and profit, to arrive at this year’s premiums. Their model gives them absolutely no incentive to keep costs down. If anything, they stand to make more money if they can point to higher claims paid out. And, in order to avoid one company looking like the bad guy, they pool their information and point to the total and say, smiling sweetly, “See, claims are rising. Sorry, but we have to raise your premiums again.”

The fundamental system driving claims and payments, therefore, is inherently skewed to causing costs to rise faster than other countries where the intermediaries (mainly government agencies) have little to gain from increases, except possibly more scrutiny and criticism.

It’s a well documented phenomenon that the fear of being sued persuades health care providers to recommend or insist on more tests and procedures than anywhere else in the world. Then you add that to the payment system where the insurance companies make money from this, BOTH by increasing health care premiums (“Look, claims are up! Your premiums just went up”) and selling specific insurance policies to doctors and all manner of health care providers. Now the insurance companies make more money twice by offering tepid resistance to spurious lawsuits filed by (now very rich) trial lawyers.

Nowhere else in the world are lawyers this empowered and rewarded for pushing the envelope in a society where the media feeds on outrage. And, when lawyers can make big money suing anything with an insurance policy, you can bet they will.

Hospitals compete to attract patients not on cost, but on the luxury and amenities they can offer. I used to be in the sign business and I just can’t help noticing that just about every hospital in Denver I’ve been to has signs more expensive and elaborate than you’ll find in a Ritz Carlton. And you know if something as trivial as room signage, which accounts for less than one half of one percent of the construction budget, is so over the top, everything else cost as least double of what it would have been if cost was a major issue. And the reason they compete on luxury, not cost, is the patient doesn’t overtly pay for it. So it goes on the claim, which gets built into next year’s premium. And the patient can’t understand why her premium just went up… again.

And so the hospitals and insurance companies have developed this game where they break down services finer and finer, and file claim charges that make the $600 hammer sold to the military look like child’s play. The insurance companies don’t protest (well, not so much you’d notice) because that increase is one more source of increased premiums, which always translate to bigger profits and executive bonuses.

This comes as no surprise to anyone. All you need to do is look at what drug companies spend on salesforce compensation and lavish perks to all and sundry to realize they are making more money than Scrooge McDuck can fit into a million bathtubs. Oh, and let’s not forget the avalanche of ads on TV and in every publication we read. If your drug is to be prescribed based upon need, why do you need to advertise?

1. You have to spend money. The biggest thing critics of drug companies point at when they rant and rave over ludicrous drug prices is Big Drug profits. Hey, what better way to keep profits down than to spend a mint on sales, marketing and advertising?

2. You have to control the pusher. The biggest difference between legal and illegal drug dispensers is one is licensed and pays taxes. How often have you gone to a doctor and the outcome of the visit is  nothing but a prescription? This is no accident. Doctors are overrun every day with folks from Big Drug “educating” them on the latest new drugs (theirs). Decades of brainwashing by drug companies with fortunes to spend on this type of thing has created a mindset among most doctors that the cure for what ails you is something Big Drug sells… at a terrific markup. (I’m fortunate to have a doctor who rarely reaches for the pad and will always focus on finding simple, smart and cheap solutions. But I know he’s part of a dwindling minority of true caregivers.)

And, lest you think this is an overstatement, look at the unbelievable effort and money Big Drug is spending to make it impossible for patients to buy generic drugs when they come off patent. Big Drug fought curbs on their shenanigans all the way to the Supreme Court.

There are always more reasons than just four for anything so pervasive and evil as a health care system geared to get rich off their customers’ misery. But those four reasons are a good start.

Neither the patient or the primary care doctor have any power in this system to curtail health care costs. Soup to nuts, the system is aimed at separating patients from their health care providers, and padding every layer in between as much as they can. The charts above show they are getting away with close to murder.

The solution is simple, but not easy.

1. Eliminate the employer in the mix. Don’t reward or penalize employers for offering health insurance. Take health care completely away from the employment transaction. Why should someone pay less for medical care because they work for Big Drug, rather than for themselves. Makes no sense. Once individuals pay for health care insurance like they pay for car insurance, you bet they’ll begin to pay attention to premiums and ways to keep those down.

2. Remove profit making companies from among insurers. Disconnect last year’s claims from calculating this year’s premiums. You have to provide insurers with an incentive to fight hospitals, Big Drug and lawyers.

4. Do like most civilized countries and offer decent health care at low cost. Seriously, are we saying France and Germany are better than us?

However, the countries in Europe have two big advantages over us: they don’t have a legal system geared so heavily toward lawyers at the expense of everyone else, and they don’t have billion dollar lobbyists dominating government at all levels. And that means that any solution to the high cost of American health care will happen over the dead, well-manicured, Armani clad bodies of every lobbyist on K Street. Donkeys have a greater chance of flying.

The only solution will come when individuals get off their 300 million butts and demand change. You can start by tweeting, sharing and emailing this post.