This past week President Obama presented his annual State of the Union address. In the run-up to the event, the media generally sympathetic to his side of the political aisle expressed a frustration deeply felt: in the New York Times a day or so before Mr. Obama’s speech, Jackie Calmes, their White House correspondent, fumed that “…never during his time in office has the state of the economy been better — yet rarely has he gotten such low marks from the public for his handling of it.”

It got worse. The ratings for the nationally televised address itself received the lowest ratings in 14 years, with barely 10% of the nation tuning in to hear the speech.

The way Ms. Calmes states it makes it sounds like the economy is in great shape. She’s not alone. The Associated Press, one of the largest and most reputable news organizations in the world, added to what is becoming a growing chorus, proclaiming that the economy of America can be expected to have a banner year in 2014.

The U.S. Department of Commerce released a report in the last week, stating that the American economy grew by 3.2% annualized in the last quarter of 2013. There’s plenty of evidence to back that up. Unemployment is at its lowest since the Great Recession began, home prices and new housing starts are at five-year highs.

According to the Federal Reserve, the overall gross domestic product of the American economy reached new record highs in 2013, surpassing even the heady days of 2006. This chart (in Bronco colors) shows that: This would seem to support the view held about the economy being in a good state. If so, that would indeed beg the question: why is the current president so unpopular?

No American president worth his salt have ever passed on the opportunity to claim credit for a booming economy. And generally, the population reflected their agreement in high approval ratings of the person who sleeps in the main bedroom in the big white house in Washington.

Not, as Ms. Calmes frets, this time. Her frustration is backed up by the data. Here’s a chart compiled by Public Opinion Strategies and published in the Washington Post recently: 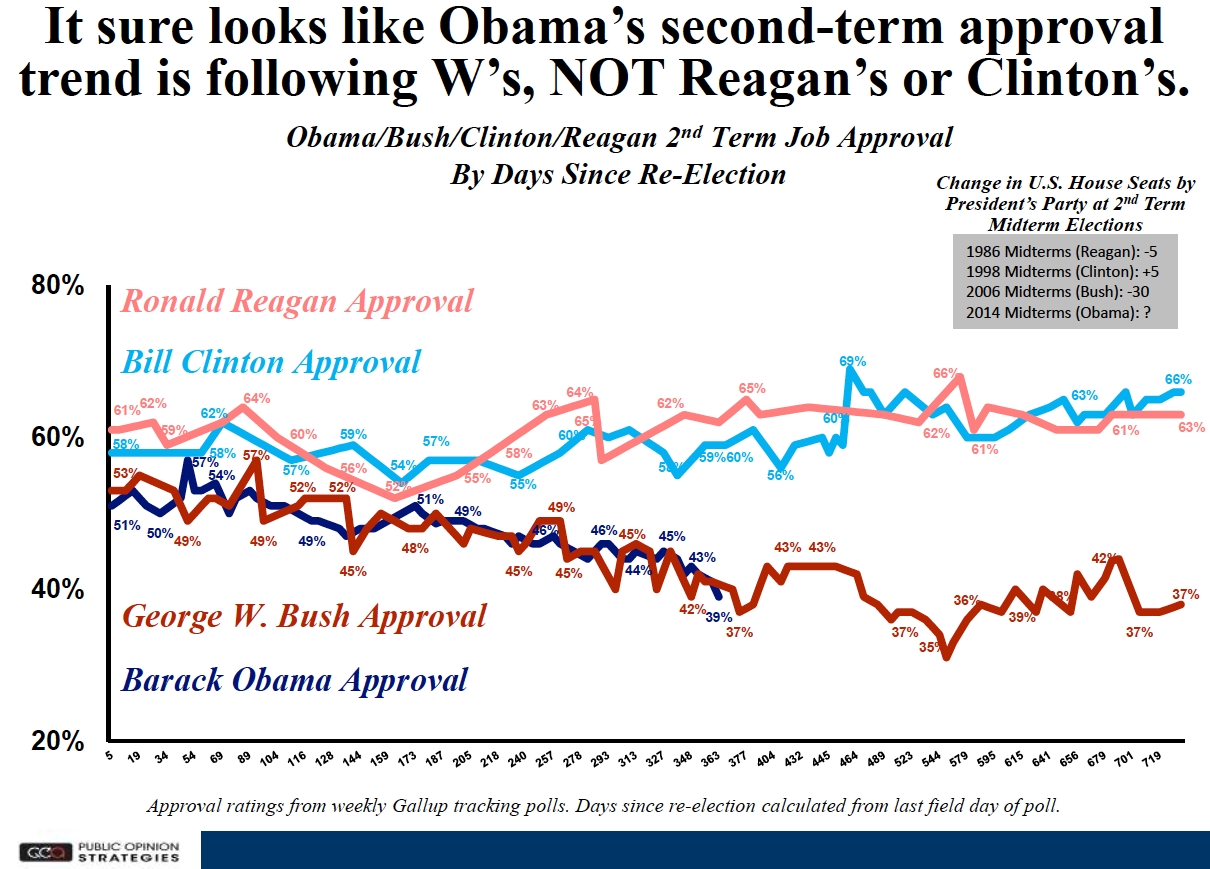 It’s interesting to observe that all four of the above-mentioned presidents served two terms, and (apart from George Bush I), we have a continuous pattern of Republican-Democrat-Republican-Democrat in the White House.

Is it fair then, to blame the economy for Pres. Obama’s low approval ratings? Ask twenty people and you’re bound to get twenty-one opinions. But is it? A closer look at the economy may be illuminating.

What’s the biggest difference between the two popular presidents and the two unpopular ones? Here’s a difference you might not hear: the stock market. Take a look at this chart of the S&P 500 index, generally regarded as the best broad indicator of the market:

The picture is pretty clear: during the eighties and nineties (the Reagan-Clinton era), the stock market was on a tear. Since 2000 (the Bush II-Obama era), not so much.

How fair is it to look to the stock market as an explanation for the low popularity of a president portrayed by his fans in the media as good, if not great? In America, perhaps more than any other country, the state of the stock market affects the psyche of the entire nation. When the stock market roars, we all feel wealthy, and when it drops, we all feel fearful and impoverished. Part of it is founded in reality, of course, because we look at the quarterly 401(k) plan reports we receive and, when the stock market is rising, the value of our retirement fund looks better. When the market falls, the value of our nest eggs drops… exactly at a time when we feel fearful and want to look to that number for comfort.

Therefore, the level of the stock market is an important input into the national psyche, which in turn will affect the approval rating we give our leader.

There’s more to the economy than the stock market, though. Look at the significant drop in the GDP growth rate from the Reagan-Clinton years to the Bush II-Obama years: 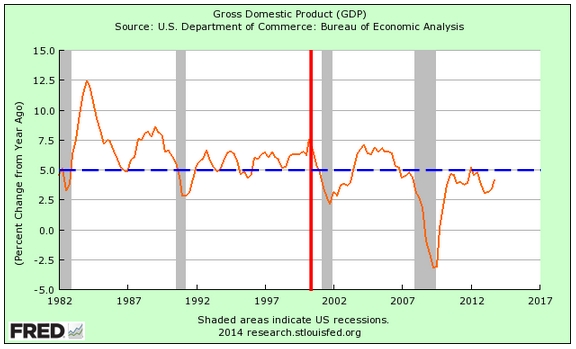 Therefore, the evidence seems to indicate that the economy is not as quite great as the media types would like to portray it. If you look at the previous chart, and you hear the experts crowing that things are going well with us because we had a 3.2% growth rate, you’d have to contain yourself not to respond: “Really? That’s the best you can do?”

It gets worse. As we pointed out before, most of the nation’s economic growth is being put in the hands of the top 1%. That means the lion’s share of the (anemic) 3.2% passed the majority of America by.

It gets even more worse, if that’s possible (and even a permissible construct in our language): this economic growth, such as it is, is about to come to an end soon. It’s been five years since the bottom of the last recession, and history shows us to expect the next downturn 5-8 years after the last recession. Five years after 2009 is now. That means the next downturn can hit at any time.

Not good news for any presidency counting on a healthy economy for high approval ratings.

The economy clearly is not in as good a shape as some media types would have us believe. It wasn’t as good for Mr. Obama’s predecessor, either. The average American, and President Reagan famously pointed out, is not stupid. They see facts as they are and, for the most part, approve accordingly.

While the approval rating of the nation’s Chief Executive may be dropping, Grant’s is at an all-time high. And why wouldn’t it be, given that he’s known for shopping for the absolute best rates for your homeowners’ and auto insurance? Whether you’re one of the 90% who didn’t watch the State of the Union address, or one of the minority who did, don’t be one of those who neglected to give Grant a call.