Tiny Houses – The Next Little Thing?

It’s on Pinterest (in fact, that’s where the picture above came from). It’s in the New York Times (been there for quite a while, actually). The Huffington Post has an entire section devoted to it, with links to respected magazines like Sunset and Southern Living. You can find several blogs, many widely read, about it. They’ve even launched a new television series about it. What is this “next little thing,” as the NY Times calls it? The tiny house or tiny home.

What Is A Tiny House?

The usual definition is a house with less than 750 square feet of living space, but most tiny houses you see featured are way smaller than that. For example, the first house featured on Tiny House Nation is under 200 square feet.

That may be a little extreme for some, and many go for something that might not make a Tiny House highlight reel, but is still efficient and ultra-compact. The Tiny House blog tells the story of someone who “upsized” to a whopping 520 square feet!

with a roomy interior living area that looks like this:

The creativity involved in this new endeavor is quite something, as you might imagine. Here are a few images culled from a cursory search (links embedded in the images).

The most natural setting for tiny houses is “out there,” where most do duty as vacation cottages and/or serve the desires of occupants who truly want to get away from it all.

Not everyone wants to spend their lives in blissful isolation. Others want to continue their daily lives in a more traditional urban setting (fancy-speak for: they have jobs and still have to eat, and there are no jobs in the great nowhere).

The biggest challenge facing tiny house designers is, of course: how do you fit anything remotely resembling the lifestyles we’ve grown accustomed to inside a postage stamp? And it’s not surprising to see some pretty nifty design innovations here. Sunset magazine showed the exterior and interior of this modern charmer:

Here are a few other interesting interiors:

If you’re stumped on how to design your state-of-the-art tiny house, and you’re the architectural version of a brown thumb, there are several sites which sell plans. Here are a few renderings to whet your appetite:

But …Is It A Movement?

Not yet. while the media mentioned above gush about the intellectual elegance a well-designed tiny house may embody, there’s no real evidence that America is even close to thinking seriously about it. Think that’s too bad to be true? Think again. Here’s a chart drawn from Census Bureau statistics: 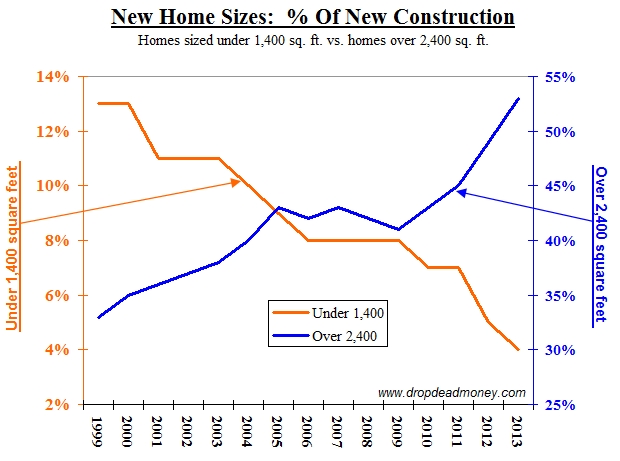 You can see the long term downtrend in home sizes under 1,400 sq. ft., matched by the strong rise in McMansions. During the Great Recession there seems to have been a pause as people considered the value of smaller homes. But, the economy is good now, and the surge to large homes resumed and continues unabated.

It’s not easy to make the switch to a smaller home: city codes often prohibit such small structures, because they’ve become conditioned to associate small with poverty and blight: it wouldn’t do to allow lean-to shacks and shanties within the city limits, would it? Banks typically frown on making loans to properties they deem not easily salable — and the chart above tells you why they’re in love with mini-castles.

But if you were wondering if Grant and his capable team can get you insurance for your tiny house, rest assured: if anybody insures tiny houses like these, he’ll find them for you. And even if you don’t think tiny houses are for you, he still will find you the best insurance you can get. Give him a call today.